Usually, a nice broth takes hours to prepare. Luckily this is not the case for this easy Vegan Sesame Noodle Soup. You can prepare this broth in less than 15 minutes. Perfect for when you want a nice warm bowl of noodle soup but don’t have time to prepare a complex broth.

The broth is the star of the vegan sesame noodle soup. So take your time to prepare the broth and taste and adjust the broth to your wishes. The sesame and soy give the broth a creamy flavour. While the vegetable bouillon and soy sauce add a salty flavour and give the broth more depth.

Unfortunately, some noodles contain eggs. So always make sure you read the ingredients before deciding which noodles you’ll use for this recipe. I recommend using ramen noodles for this recipe because this recipe is inspired by sesame ramen. However this is not mandatory, the broth tastes nice with other noodles as well. So you can also use anything you have at home as I did with rice noodles.

You can add any toppings you like to this vegan sesame noodle soup. I do recommend adding some protein and vegetables for a nice balance.

For the protein I used dried soy meat. Before baking I soaked them in cooked water for 5 minutes. The soy meat has a nice structure and soaks up flavour really well making it perfect for a soup.

For the vegetables I decided to use something I already had at home that would fit the broth and the soy meat. The first vegetable I chose was corn. Corn is always a safe option when it comes to noodle soups. The second vegetable I chose was leek. Leek is also great to add to soups and the green with the yellow really made this bowl pop.

But there are many vegetables you can use other examples would be cabbage, bean sprouts, spring onions, bok choy, or spinach. 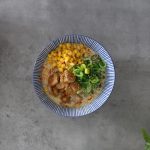