Time for a treat? Try these vegan cinnamon rolls. Not only do they taste delicious, they also make your home smell amazing.

How to make the perfect Cinnamon Roll dough?

To make the perfect vegan cinnamon roll dough it is important not to add too much flour. After kneading the dough may feel a little wet. This is normal, if you add more flour the dough won’t turn out as fluffy. After the dough has risen it will have the perfect texture.

The filling for the vegan cinnamon rolls is very easy to make. Just make sure you don’t forget to take the butter out of the refrigerator a couple hours before you’re making the rolls. If the butter is too hard you can’t make a nice paste.

For this recipe I’ve decided to use two tablespoons of cinnamon. However if you prefer a stronger of lighter cinnamon taste you can add a little less or more Just taste the paste before you add more cinnamon to the mixture.

How to create the perfect cinnamon roll shape?

It is also important to make sure that the dough is not sticking to the surface. The first thing you should do is add some flour to the surface you’re going to roll the dough on. The second thing I did to prevent the dough from sticking is flipping the dough after a couple rolls. This way both sides will be covered with a little flour and you can also check if the dough is starting to stick to the surface. 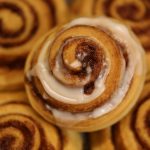 Rolling and baking the buns