Although the mince meat makes this dessert unique. The dough is also very important! You can knead the dough with your hands or use a food processor.

I also put the dough 30 minutes in the fridge after kneading.

Before rolling the dough put some flour on your surface. Make sure you just ad a little flour because too much flour can make your dough dry.

Next you can use a cookie cutter or a glass to make a circle that’s a little larger than the holes in your cupcake pan.

Gently press the dough in the holes to make the cupcake shapes. And fill them with the mince meat.

For the top you can make some nice Christmas shapes with a cookie cutter or a knife like I did.

After approximately 30 minutes in the oven on 220° your mince pies will look golden brown. You can sprinkle them with some icing sugar and add some vegan whip-cream. 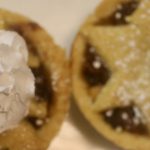 For the mince meat

This Vegan Nut Roast is a classic but very festive recipe. Pair it with some baked potatoes and you’ll have a very satisfying main course.

Next you can add all the ingredients and stir really well.

You can add anything you like for garnish. I chose to add some pomegranate seeds and basil leaves for a Christmas vibe. 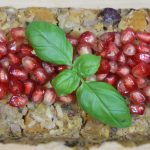 kimchicooking This Vegan Nut Roast is a classic but very festive recipe. Pair it with some baked potatoes and you’ll have a very satisfying main course. Preparing the ingredients Before we… Dinner Vegan Nut Roast European Print This
Nutrition facts: 200 calories 20 grams fat
Rating: 5.0/5 ( 1 voted )

If you’re looking for an easy Christmas cocktail. You should definitely try the cranberry champagne. With just 3 simple ingredients and a couple second you can transform any champagne into this beautiful cocktail.

Add a spash of lemon juice

Top it off with champagne

And garnish with some mint. 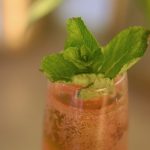 kimchicooking If you’re looking for an easy Christmas cocktail. You should definitely try the cranberry champagne. With just 3 simple ingredients and a couple second you can transform any champagne into… Drinks Cranberry Champagne European Print This
Serves: one cocktail
Nutrition facts: 200 calories 20 grams fat
Rating: 5.0/5 ( 1 voted )

These vegan mushroom puff pastry cups are my favourite Christmas appetizer. They are so crispy, so creamy and so easy to make!

Also make sure you read the instructions before you start making the cups. My sheets were stored in the freezer and needed to thaw a few minutes before they were ready to use. When the sheets were ready I just gently placed them in the cupcake holders and molded them into a nice shape.

Bake the sheets according to the instructions on the package. Mine had to be baked 20-25 minutes on 200°C.

The ragout is also quite easy to make. Just make sure you mix the butter, flour and vegetable broth really well. You don’t want any lumps in the sauce before you ad the mushrooms. The sauce will also become thicker when you leave it longer on the stove. If the sauce is too thin just leave it a little longer. And if the sauce is too thick add a little bouillon. 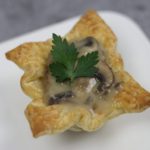 While the puff pastry cups are in the oven prepare the mushroom ragout.

Hot pot is one of my favourite dishes. It is so delicious and so much fun to eat. Hot pot is also super easy to make and requires minimal preparation. Perfect for a relaxed dinner!

You can use any flavour you like. Asian grocery stores often sell hot pot seasoning. You can buy one of those or make your own. I used two flavours since my hot pot pan has a division in the middle. I bought a mushroom seasoning for the left side of the hot pot. And made a miso broth for the right side.

You can also boil anything you like in the hot pot broth. Below are a few examples of the ingredients I used. But you definitely don’t have to limit yourself to those.

To have the authentic hot pot experience you’ll need a hot pot pan, chopsticks and some hot pot strainer scoops. Stores often sell two types of hot pots. The first type is the more traditional one which you’ll have to put on a stove. Often a small portable gas stove is used to put the pan in the middle of the table. And the second type is an electric hot pot pan which does not require a stove but has a build in heating element.

My hot pot pan belongs to the first category. I have a small portable induction stove. So I just use that one to boil the food in the middle of the table. But any type of portable stove would be fine. If you don’t have a portable stove perhaps an electric hot pot pan would be the more convenient option.

If you don’t have chopsticks or hot pot strainer scoops you can also use other utensils. 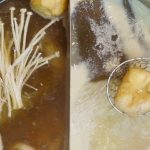 kimchicooking Hot pot is one of my favourite dishes. It is so delicious and so much fun to eat. Hot pot is also super easy to make and requires minimal preparation.… Christmas Vegan Hot Pot European Print This
Prep Time: 10 min
Nutrition facts: 200 calories 20 grams fat
Rating: 5.0/5 ( 1 voted )

The Matcha Gin Tonic is one of my favourite cocktails. It has such a unique and refreshing taste. This green cocktail is also perfect for Christmas!

Before you start shaking all the ingredients. It is very important to mix the matcha first with a little liquid to prevent lumps. I just put the matcha powder in a cocktail glass and mixed it with the sugar water.

Time to add the other ingredients (except the tonic) and some ice. It is very important to add ice if you are using a cocktail shaker. The ice will create a vacuum effect that will make sure the saker will stay in place. If you don’t have a cocktail shake you can mix the ingredients in a glass. 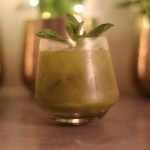 kimchicooking The Matcha Gin Tonic is one of my favourite cocktails. It has such a unique and refreshing taste. This green cocktail is also perfect for Christmas! Preventing lumps Before you… Christmas Matcha Gin Tonic European Print This
Serves: 1
Nutrition facts: 200 calories 20 grams fat
Rating: 5.0/5 ( 1 voted )

Impress everyone with these adorable mini vegan cheesecakes. No baking required! So they are also perfect for an easy Christmas menu.

For the crust I used some simple vegan cookies, pecan nuts and some melted unsalted plant based butter. You can crush the cookies and the pecan nuts in a zip lock bag or use a food processor. The dough for the crust should be a little sticky and still have some texture.

Make sure to divide the dough equally. And press the dough flat with a spoon.

The cream cheese for this dish is made from cashew nuts. If you do not have a high speed processor you will have to soak the cashew nuts overnight. If you have a food processor that works really well you can skip this step and blend the cashew nuts until they have become as small as possible. Next you can add the wet ingredients to create the sweet vegan cream cheese.

Divide the sweet vegan cream cheese evenly. And make the top flat with a knife or spoon. 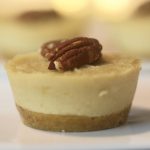 For the sweet cream cheese

These Vegan Zucchini Roll ups are perfect for Christmas. Impress everyone with this beautiful dish.

The most important part of this dish is probably slicing the zucchini as pretty as possible. If you have ugly slices. You’ll also end up with ugly rolls. To get the perfect slices I used a potato peeler. And carefully sliced each layer while applying a little pressure.

Try to avoid the heart of the zucchini by flipping the zucchini to the other side as soon as you see that the slices are becoming mushy.

For this dish we’ll be making two different sauces. The first one is a tomato sauce. The zucchini roll ups will be baking in this sauce. And the second sauce is a vegan cream cheese. This sauce will be used to stuff the zucchini roll ups.

Rolling the Zucchini slices is actually very easy. It only takes a little patience. Take your time to prepare this dish and start preparing early. You don’t want to rush.

After baking the dish for 30 minutes in the oven the result is super pretty! 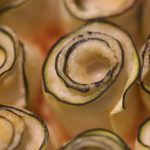 These vegan stuffed portobello’s are the perfect appetizer for a classy dinner. They look amazing and are super easy to make.

Before baking and stuffing the portobello mushrooms. It important to first remove the stem and grills from the mushrooms. You can break the stem with your hands and remove the grills with a spoon. 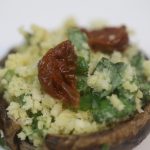 The White Mojito is perfect for Christmas. Impress everyone with this snowy twist on the classic mojito.

Just like with the classic mojito muddle the lime and the mint with some sugar in a glass. By muddling the flavour of the mint and the lime will be extracted.

Fill the glass with ice before adding the rest of the ingredients. The ice gives to cocktail a nice classy look and also keeps the liquid cold.

Next pour the coconut rum mixture in the glass and top the glass of with some sparkling water. 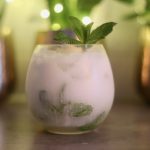