This creamy vegan Banana Milkshake is a real crowd pleaser. Treat yourself or someone else to this vegan version of the classic banana milkshake. If you like this vegan milkshake you might also like my vegan Oreo and vegan strawberry milkshake.

How to Make a Vegan Banana Milkshake?

Next add the Bananas and plant based milk and blend until you have a smooth texture.

To make the milkshake look really good you can add some extra garnishes. For the banana milkshake I added a banana slice, some soy whip-cream and sprinkled some vegan chocolate on top. Watch my youtube video on the op of the page to see detailed instructions on how I made the chocolate stripes in the glasses.

And there you have it a beautiful vegan banana Milkshake in only a few minutes! 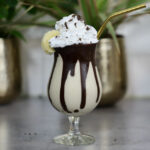