Is it me or does oatmeal just make you happy? I love this apple cinnamon oatmeal for breakfast. The apples become so delicious and sweet after cooking. And in combination with the cinnamon and raisins this becomes such a wonderful first meal of the day.

If you like oatmeal you may also like my Chocolate Peanut Butter Oatmeal and Cinnamon Ginger Oatmeal.

How to make Oatmeal?

Oatmeal is super easy to make. Just add the desired amount of oats and twice as much milk. I usually estimate the amount of milk I need. But if you’re not used to making oatmeal you can measure the milk to be sure you’re not using too much or too little.

Start by slicing the apples. The apples will cook faster if you slice them in smaller parts. You can also slice the apples into cubes if you like. Also don’t forget to remove the core of the apples.

Add some cinnamon and ground ginger to the oatmeal and mix until the spices are divided. And put the cooked apples on top of the oatmeal.

Add the dried cranberries and raisins and the oatmeal is ready!! For an extra garnish I also added some shredded coconut. But you can skip this step if you want to save some time. 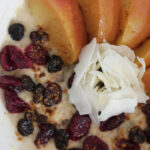 kimchicooking Is it me or does oatmeal just make you happy? I love this apple cinnamon oatmeal for breakfast. The apples become so delicious and sweet after cooking. And in combination… Breakfast Apple Cinnamon Oatmeal European Print This
Serves: One bowl Cooking Time: 15 min 15 min
Nutrition facts: 200 calories 20 grams fat
Rating: 5.0/5 ( 1 voted )