Cinnamon and ginger are the perfect ingredients for a fall oatmeal. Not only do they taste delicious together, they also have a warming effect on your body. Therefore the Cinnamon Ginger Oatmeal is the perfect breakfast for when it is starting to get colder.

Oatmeal is super easy to make. just add the desired amount of oats and twice as much milk. I usually estimate the amount of milk I need. But if you’re not used to making oatmeal you can measure the milk to be sure you’re not using too much or too little.

For the cinnamon ginger oatmeal recipe I’ve used candied ginger, cinnamon, dates and a banana. Ginger and cinnamon are known to have a warming effect on the body. Therefore they are perfect for when the weather is staring to get colder. To balance the flavours I’ve added a banana and one large date. The banana makes the oatmeal extra creamy and the date adds are used to make the oatmeal a bit sweeter. 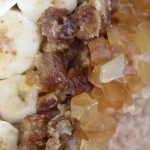 kimchicooking The Perfect Fall Breakfast Cinnamon and ginger are the perfect ingredients for a fall oatmeal. Not only do they taste delicious together, they also have a warming effect on your… Breakfast oatmeal, ginger, cinnamon, fall European Print This
Serves: 2 Prep Time: 5 min Cooking Time: 5 min 5 min
Nutrition facts: 200 calories 20 grams fat
Rating: 5.0/5 ( 1 voted )